Don’t laugh and don’t judge. I’m sure we’ve all been there at some point. Haven’t we? Please say yes 🙈 When I was little (around 7 years old) I wanted to own a dog. Both parents working full time and a mum who wasn’t keen on four legged furballs, it was never going to happen. So I did the next best thing and pretended to be a dog instead. Until I realised something very obvious. I didn’t want to be a dog. I wanted to be a cat…because cats can drink milk out of saucers. I still remember the bemused/slightly terrified look of the babysitter.
Then a few months ago, I caught my 5 year old playing fetch shouting “Come back here little doggy! Come on! There’s a good boy!” to his 3 year old brother, who much to my horror was dutifully obeying, running towards him with a rotten old stick in his mouth.
Both the boys regularly “charge” at us pretending to be rhinos and my eldest even went through a phase of being a woodpecker. That was fun and games. Particularly when he had decided that hubby and myself were trees. It was like living with a very enthusiastic and excitable Woody Woodpecker.
But why do children pretend to be animals and how should we, as parents and carers react to it? It could be pretty frustrating if your kid is pretending to be a worm and all you want is for them to put their shoes on. Or perhaps it’s Bolognese Wednesday but they’ve decided they’re a penguin and refuse to eat anything but fish?

According Dr Gleason in this article Why My Kid Won’t Stop Pretending To Be A Lion – New York Times it’s to do with a cognitive developmental task called “the theory of mind” she goes on to say it’s the idea that “other people have thoughts, and those thoughts can be different from your thoughts,” ‘ the article also helpfully goes on to give advice on how to manage behaviour if the child is spending a little too much time being their animal.

Another benefit of this form of play can be the development of gross motor skills. It can get children using all sorts of different muscles.

One game we’ve played in the form of “Simon Says” was an animal race game.

– children then have to race to slither to other side of garden/room. When they reach the end, they run back to beginning.

As strange as we might find it there are so many benefits for our children to pretend to be animals. It’s so good for their imagination! And ours. The last few days, neighbours may have heard me zooming around the garden with my spider powers chasing the tasty little 2 legged flies. When I caught them they got spider tickles. Then they tried to catch me by turning their fly powers into super cheetah and mega bee buzz powers. I can honestly say that it’s the best fun we’ve had in a game! So if your child is pretending to be an animal, as long as it’s not stopping their day to day stuff like going to school/nursery and isn’t causing disruption to they’re daily life, then absolutely join in the animal antics!

Thanks for reading! Below is a review for the unique and humorous inspiration for this blog “I Am A Tiger” by incredibly kind and imaginative Karl Newson. 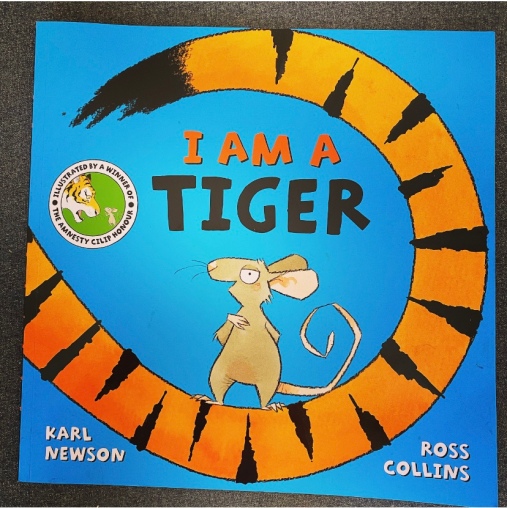 When is a mouse not a mouse? Well when they’re a tiger of course! What a great book with really eye catching illustrations. A mouse convinces his friends that he is in fact a tiger. He’s so convincing that even the tiger believes him! But what does that make the tiger? And what are the other animals? It’s such a fun book and really gets kids thinking. What I love is the mouse’s confidence and belief that he can be anything he decides he wants to be. Fabulous for guessing games – describe some animals to children and imagine how the mouse might see them. A thin, pointy thing that hangs in trees couldn’t possibly be a snake could it? And if it’s tiny, colourful and sits on a stick surely it must be a lollipop?

We had lots of fun and giggles with this bright, colourful hilarious book and will definitely be getting the sequel “I Am Not An Elephant”

And now a big thank you to Karl for this the Q&A – loved the answers!

Q1: How would the mouse describe you if he saw you?

Ross and I play a game in our events where we do this exact thing! I’m described as ‘Wild. Curly topped. Weedy.’ The children can only see the description on a silhouette of broccoli and they shout out guesses of what they think Mouse is describing – it’s lots of fun!

Q2: What is the main piece of advice that the mouse would give to any fellow mice that might be struggling with self-confidence?

I think she’d say (I always think of Mouse as a ‘she’, but to Ross she’s a ‘He’ – I love that Mouse is different for us all) don’t feel restricted by how you look on the outside – it’s how you feel on the inside that counts. And how you feel can fit a time and a mood and a place – it can change… make it work for you when you need it.  🙂

Q3: What is his favourite part of being a tiger?

I think it’s all the ‘GRRRR’ing!

Q4: What are your future book plans?

Mouse has a three-quel publishing in August (and I have plans for her that I’m hoping might happen one day). I have three other books due to be published between August and October (two more picture books and a young fiction) and a few more due next year. I can’t really say much more at the moment as most of them are under wraps for the time being… but they should be revealed soon, I hope! I’m writing lots more at the moment – in my experience picture books tend to take about 2 years to publish after being contracted so I’ve got 2022 in mind now and am guessing what the trend might be then. I’m looking forward to finding out!

And do check out Mudwaffler Club! It’s sure to put a smile on your face and my kids love it. There’s even a reading of “I Am A Tiger” Click below for the link:

A place to nestle down and make things up, brought to you by children’s book author Karl Newson. Here, we’ll read books, write stories and create drawings together. We’ll write our own NONSENSE POETRY. We’ll make our own MUDWAFFLER CLUB BADGE. We’ll colour things in. Cut things out. Read letters. Answer Questions. And eat biscuits… Are you ready? It’s Mudwaffler time!