The boys started back at school and nursery last week . I’m very happy with how the practitioners and school have set up for learning in lockdown and how thorough and vigilant they are. It should absolutely be parents’ choice on whether to send the kids back or not but for us school/nursery returns couldn’t have come at a better time. The past couple of lockdown weeks, I’d been noticing a change in both my sons’ behaviour. My 5yo had been having frequent outbursts of frustration. The other day when I asked if he wanted to talk about anything he calmly told me “I’m just fed up with your face, daddy’s face and my brother’s face!”

My youngest (3yo) loves his nursery and talked a lot about his friends and carers there. Now he was talking about them several times a day. We got a paddling pool “I splash with my nursery friends in the nursery pool”. He plays with sand “I play with sand at my nursery with my friends”. “My friends will come to my house and I will play with them” He even told a family member on the phone that he’d played cricket with his best friend that day. He hadn’t. We are not as a family even that into cricket! The most heartbreaking moment was when my eldest mentioned flapjack and 3yo suddenly from nowhere started hysterically sobbing. He’d just been smiling and laughing. I bent down to cuddle him and half thinking it was a toddler tantrum explained that we didn’t have any flapjack. Bottom lip quivering and tears down his face he stuttered “But I love flap jack. At nursery G. makes flapjack and my friends eat flapjack and I sit together eating flapjack because my friends eat flapjack and they sit next to me and we all eat flapjack.” I mean, what do you say to a 3yo who’s world is upside down and you don’t know when it will be the right way again. And I (perhaps naively) had no idea that a 3yo could have such emotions about things that are not in their immediate vicinity. So I started much more with him about his friends and also tell him I miss mine. We often ask children to share how they’re feeling but try and hide our emotions from them. I’m not a child psychologist, and I’m not suggesting we bombard them with all the adult issues of the world but I have noticed, if my kids are a bit quiet or look upset and I say something like “I’m sad because I miss my friends” or “I’m frustrated because I want to go to the playground and we can’t” then they are more likely to open up too. Though it’s important not to dwell on negative thoughts, once they’re out but I do wonder how children are expected to learn to talk to us when we try and shield things from them? One thing I do with my sons is talk about a imaginary red balloon. If we’ve had a bad experience or day, the balloon is down. To get it to go up, we fill it with happy experiences from the day eg splashing in puddles, snuggling on the sofa or even my son put a lasagne he enjoyed in it. I say if my balloon is on the floor too. Then I ask them where they’d like the balloon to get to (as high as an aeroplane or up into space etc) If it’s only as high as a tree, we put more happy thoughts in it. I’ve found this way, I get to hear what’s bothering them and also we learn not to focus on negativity.

There are also some amazing books which help us which I’ll be reviewing including Pete Stays Home by Karra McFarlane (which will feature in a future blog!) and starting below in this blog with incredible AB Gets His Wings by Richard Bland. 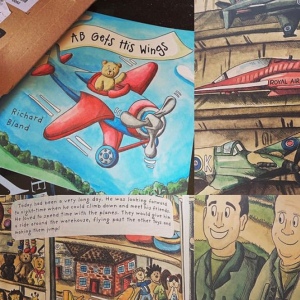 AB Gets His Wings by Richard Bland, Illustrated by Rosie Philpott

I saw AB Gets His Wings mentioned on Twitter and ordered a copy straight away. It’s about a bear in a toy factory who is waiting for his turn to be picked to be a toy for a child. One day he’s plucked off the shelf, and into a box away from his toy friends. He has a lot of questions and thoughts of uncertainty of where he’s going and isn’t sure of what to expect. He’s delivered to a kind RAF team and with their help overcomes his worries and joins them on their flights and adventures. The illustrations are beautiful and the book got my 5yo to open up about the worries and uncertainty of lockdown. It’s such a lovely comforting story. He declared it one of his favourite books in the world!

There’s a beautiful reading of it by Colin WD McLean on The Healing Voice’s YouTube Channel here and my son’s school loved it so much they’ll be getting a copy to read to pupils.

To read more about why the book was written, please see below.

Seven years ago Richard Bland, the author, devastatingly lost his son to suicide. He now tirelessly raises awareness of mental health problems for children. All his life, Richard loved taking photos of aeroplanes and went to many air shows with his children. When the kids grew up, he started going to photograph planes with a mate and found a not very well known spot in Wales where they got some amazing snaps of RAF planes! A chance meeting with the partner of an instructor led to Richard getting to know the RAF crew and taking photos for them.

Photo by Richard Bland: The photo of the instructor blowing a kiss

It was an officer at the Met Police (they had a partnership at RAF Valley) who introduced Richard to 19 Squadron, which changed his life. He was asked to produce 2 charity calendars which raised £30000, was made an honorary squadron member and got to fly with them!

After the 2 calendars and limited edition prints, Richard was asked by the boss “What next?” . He then struck on the genius idea of getting a teddy bear that the pilots could take with them and photograph. The bear of course has his own log book and has been everywhere starting with Las Vegas to Afghanistan. Richard spent 2 years posting, taking, collecting photos of Wing Commander AB all over the place. From, the Red Arrows to some of the most prestigious last flights of RAF jets, to flying in the lead jet of a Buckingham palace fly past, to flying with the met police, Manchester police. It became a must do for RAF aircrew and friends.

Photo by Richard Bland: AB Bear with his log book

All was going well then Richard and his family’s world fell apart. Their 31 year old son Andrew took his own life and Richard and his family didn’t know where to turn. The dedication of the guys around the country was immense. Fritz, the met policeman was with them in 2 hours from the centre of London the night Drew died. He came and took over everything for them and dealt with the police on their behalf. Drew died on a Friday and every Friday night since has been torture for Richard and his family. Every night, they sleep with the light on in the hallway so that Drew can find his way home.

As the mother of 2 young boys, it’s impossible to even contemplate that something like this could ever happen. And I look at the photo of a young Drew and it could be like looking at a picture of one my sons’ friends or the son of a family member. 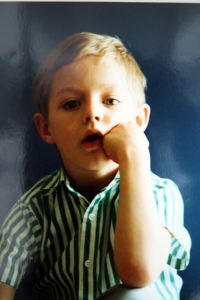 We never know what their future will be like but it’s so important to talk about mental health and get our children to open up and know that it’s ok to ask for help. Richard started looking for a person or group to help them deal with what had happened and his eldest son, Peter, found The Dove Service the only grief support charity in Stoke-on-Trent & North Staffordshire, providing services to people within the community from the age of 4+ who are experiencing issues relating to bereavement, loss or life-changing illness. Richard and his wife Sue visited them several times and they provided fantastic support whenever things got on top of them. Richard offered the charity Wing Commander AB (AB stands for Andrew Bland after his son) and photographs to auction or sell to raise money for the charity as a thank you. After several meetings, the idea of a children’s book was formed. Because the book was all about the RAF with real people and names, Richard and the team spent time getting permission with the help of the RAF Valley station commander. The official reply from the MOD came back and everything looked doubtful as it was necessary to apply for an intellectual property licence and getting one would be unlikely. Undeterred Richard applied and visited the MOD in Whitehall twice and was granted it! The whole process from writing to publishing took 5 years as every page, image and name in the book had to be approved by high level MOD people. Richard says that there are a lot of people to thank for getting AB’s story to the bookshelves! The main message of Richard’s book is to get kids to talk, talk, talk. And it works – my son talks about why AB is worried in the book, tells me if he’s feeling nervous about something and likens it to how AB is feeling. He’s a happy kid and full of bounce and fun but when the chips are down, or he’s going through changes for example the lockdown, he doesn’t always know how to express that and like many children often doesn’t say anything. Books like AB Gets His Wings are fantastic for giving children characters and vocabulary to help them express these thoughts. There are plans in the pipeline for a future book too so watch this airspace for more AB adventures. Thank you so much for reading.

If you have been affected by suicide or are having suicidal thoughts please know there is help out there and you are not alone. Please do reach out.

Help and advice can be found here: